Last month, I was away for a few weeks as a result of a nasty injury to my hand (sidenote: Dragon is proving absolutely invaluable), and since then, it’s come to my attention that I may have omitted several incidents that took place then that would probably be worth mentioning.

The first of which involves work, when late one morning, the head of the entire organization comes down to my office to inform me that the building was going on lockdown, and that we were not to leave or allow anyone else to leave or enter the premises until further notice – because a man with a gun was threatening to open fire.  I know.  Being in the closest office to the door outside, I immediately started panicking, dead certain that if anyone was going to get shot first, it would definitely be me. I paced the floors, closed the blinds, my heart racing the whole time, my thoughts darting between “what if this morning was the last time I see my husband?” and all the people I wanted to tell how much I loved them.  Of course, this was entirely self-induced panic, as the boss had told us it was just a precaution – and the likelihood of it actually happening were slim-to-none. But if I’m good at one thing in this life, it’s Worrying Unnecessarily, and for about twenty minutes, I think I can say I had a near-death experience! Everyone was fine – except me, two days later, when I was informed this man was coming back to the building between 7:30 and 8:00 that morning. Being the one who generally arrives half an hour before everyone else, I was asked to stand guard (at the completely transparent glass door), keep the door locked, and only let in people who I knew were supposed to be in the building. Me. The 5’3” waif of a girl who could clearly take on a potential assassin before any other staff arrived. (Sidenote: I did take jiu-jitsu for several years, but that was over ten years ago, and throwing a big scary man is slightly different from throwing other twelve-year-olds.)  Thankfully, he soon arrived with police and security, and all went on as normal. Phew.

The other noteworthy incident took place at home, and sadly, involved my little cat. I’m usually the first one home on weeknights, and I generally arrive to Miss Rose Kitten racing to greet me at the front door, meowing excitedly as if she’d been estranged for over a week, at which point I pick her up, take her out with me to pick up the day’s post, for all two minutes of which she soaks up her brief and glorious encounter with the outside world. This day, however, was different. I opened the door. There was no cat. I immediately thought she’d been accidentally locked in a room, so I quickly threw off my bag and coat, when I saw her coming down the stairs, strangely slowly. The usual mad dash was replaced by slow, cautious steps, and her head seemed to be hanging low – as if she were carrying something in her mouth. I didn’t have my glasses on, and my first instinct was something to the effect of crap, we must have mice, and she’s bringing me a present – until she got to the bottom of the stairs and didn’t look up.

Now, I should probably mention that Rose is pretty much the most fantastic cat in the world, and has an extensive repertoire of excellent qualities (case in point) – one of which most definitely isn’t her determinedness to stick her head in every glass of water, try and drink from it, then knock it over, spilling water everywhere. I turned the lights on, and to my horror, she had stuck her head in the glass carafe from the coffee machine (the lid had broken off months ago) while we were out, got said head firmly stuck with the mouth of said carafe around her neck, jumped off the counter in presumed terror, and smashed the glass on her head and all over the floor. This hadn’t removed the problem of it being stuck around her neck, and she’d spent the rest of the day in a chokehold with the spikey glass remnants sticking out around her face. One life very much lost. Thank HEAVENS she hadn’t cut herself, and I managed to get it off her quickly – but she’d probably been stuck like that for hours, unable to eat, sleep, or do pretty much anything. She was thoroughly traumatised, and I spent the rest of the evening keeping her cuddled close – until she saw a fresh glass of water on the coffee table. Head went straight in. At least we know her ordeal was short-lived…

When Brittney asked me to guest post for her, I was so excited I started clapping right there at my desk (one of many “cool” things I do when I get exciting mail, along with verbal exclamations and actually asking questions out loud) – then she mentioned the topic, and I was totally sold. One of the many reasons I love Britt is her love of animals and her huge heart for their welfare, so when I was asked to write about my own little cat, I was all over it!

This, ladies and gents, is Miss Rose Kitten. She was named Rose after the Doctor Who character (told you I was one of the cool kids!), but answered more readily to “Kitten”, and has since become kind of a hybrid, although she mostly goes by “Kit Kit”.  It’s pretty fitting – though she’s grown from a little puffball who sat in my hands to a sleek, well proportioned lady, she still has a total kitten heart. She’s definitely got her own voice and personality, so much so that I left a “how to” guide for my dad when he was cat-sitting in January – complete with instructions on batting, cat volleyball, and hide and seek. 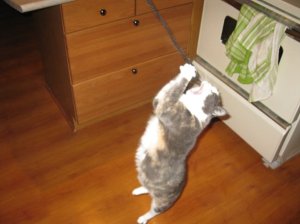 I have a ridiculous amount of love for this cat. Honestly? I’ve actually had conversations with my boy about what we’re going to do if I end up loving the cat more than my own child!!  I’ve never had a pet I’ve felt such a link with before – as a kitten, she’d hop into the shower with me, get totally soggy and come our wrapped in a clean towel, and get blowdried along with my hair.  She wants to be involved with anything I’m doing – reading the newspaper? She’s ON the paper. Marking papers? On the pile.  Watching TV? She has her own designated Movie Spot on the couch.  And don’t even get me started on unpacking the groceries. When I get home in the evenings from work, it’s 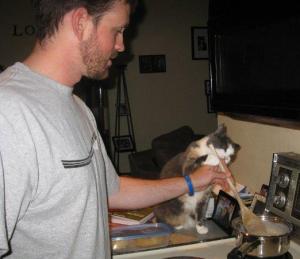 Postbox Time. She’ll run over to the front door and wait for me to take of my shoes, open it up, and carry her outside for 30 seconds to get the letters. In summer she’ll come out on a leash.  If she were a person, she’d totally be an athlete. Games are her favourite thing in the world – we have a fluffy ball hanging from a string from our banister, and every night we’ll hear little thuds of cat leaps as we’re watching TV.  Paper balls, tennis balls – anything that rolls, she’ll play football with, batting it along the ground as I tackle her down.  We’ll go to one end of a room together where she’ll flop down on her side, ready for me to scoot her along the carpet as she “paddles” her way forward. It’s PRICELESS. And she even helps with the cooking!

What I love most about my little miss isn’t just her adorable little quirks. Or the fact that she will always be there for a hug after a hard day, or to cuddle under a blanket with while I’m cold.

It’s the way she just seems to tune in to what’s going on.  I don’t know how many times I’ve been sad, or ill, or crying, and she’ll just trot on delicately over and rub her head on my shoulder, or lean her forehead on mine. How she’ll flop down and start paddling across the floor by herself to make me laugh when I’m feeling stressed.  How she’ll sacrifice the “fat lap” (she ALWAYS cuddles up with the boy, not me!) if I’m feeling a little low and come over to snuggle with me instead.  Our pets may not be able to speak English (you have no idea how badly I wanted a talking cat as a kid. Salem was my hero!), but I’m certain, especially Miss Rose Kitten, they’re more in tune with our ups and downs than we think.

I was told once that pets’ personalities reflect those of their owners.  And if it’s true, it makes me smile to wonder what this says about me.  I know no matter what, I can count on my little cat.  I don’t know what I’d do without her. And seriously? A default Scrabble partner? I think I’m just about the luckiest girl in the world!

February’s pretty much one of the coldest, most awful times of the year here in Winnipeg.  You get the post-Christmas “mild” spell, when it’ll go up to -10 and everybody will walk around without coats, secretly hoping that this time it’s going to carry us through right until summer – and then February hits, along with our annual Festival du Voyageur, a time I associate with dashing into the nearest shop to warm up for five minutes and possibly by something further to wrap around your face to stop it falling off, because it inevitably ends up being minus fifty!  This February – well, so far, however – has felt kind of different.

Kind of… full of reasons to celebrate.

On February 1st, my best friend declared it was a day of celebration.  She and her Mister had five whole years of being with each other to celebrate – an amazing couple, a wonderful friend, and definitely worth a big smile.  Then came my first day back from holiday.  I was greeted with hugs from coworkers, and little cupcakes to celebrate the ‘month of love’ – followed by a devotional on what love really means to each of us.  Then came the birthdays.  Actually, we’re still on Feb. 1st here – the ever-wonderful Brittney who I love to bits turned 27, and it was definitely a day to celebrate her and all the wonderful things she is.

The rest of the month is full of birthdays of dear friends, and Valentine’s day – a day to really celebrate this life-changing, soul-destined, wonderful love I’ve been blessed with – especially since six years ago, it could easily have never come back again.  To celebrate and be thankful for the man who’ll happily cook, clean, watch Eastenders, and show up with gifts and flowers if I’m having a hard day.

But there’s one person in all of this who has a very important birthday.  I’m not sure exactly which day it is, because she wasn’t with me until a couple of months after birth… but this February, Miss Rose Kitten is turning four!

Sorry Britt - Baily pwns Rose at dress-up, a fake hat had to do 🙂

LOOK AT HOW LITTLE SHE WAS!  And so confused…  🙂  This little cat has brought SO much joy into my life – she’s developed such a personality, likes to talk, play football, and cuddle (but only on her dad’s “fat lap”). And she’s named after a Doctor Who character.  I cherish her dearly, and I couldn’t imagine life without her – happy birthday to the sweetest little cat in the world!

What are you celebrating this month, or what’s bringing a smile to  your face these cold winter days? (A big thank you to all of you for bringing one to mine on Wednesday, too – you guys are awesome.)