I’ve spent most of my lunch hours this week working on something that, as I mentioned on Facebook, is guaranteed to offend at least someone, but prefacing it with the caveat that my intentions were coming from a good place. I was going to post it this weekend, but something passed my way this morning I couldn’t ignore, and had to write about immediately.

I know people (myself included) are generally pretty crappy at watching videos linked on a blog page, but this is too important, and I feel every soul in the world should take the seven minutes it’d take to read a couple of stories in the Metro and actually pay attention to something important. Because this affects everyone, and something small that may have happened twenty years ago can twist and distort someone’s mental well-being, confidence, and view of themselves all these years later. We need to change the norm that bullying and intimidation are just “part of life”. We need to stop being told the answer is to develop thicker skins, or that some people are just mean, and that we should brush it off. Because for some of us, we can’t. It seeps into our very selves and tangles its way around the fibres of our own psyche, resulting in what’s often a lifetime of damage and distortion.

Bullying was part of the norm when I was a kid. I think it’s pretty much a British institution in all parts of the country. I remember being picked on as a younger child of ten, maximum, for my “monkey arms”. I wasn’t allowed to shave my legs until 12

and I remember secretly shaving my entire arms with my dad’s razor every day and wearing long sleeves to PE classes for years afterward. The words of a handful of small boys evaporated from their worlds the moment they left the playground, but they burrowed their way into my self image well into my teens. I was different and ugly. The fact my mother chopped all my hair off because I wasn’t good enough at keeping it untangled didn’t help matters, and neither did an unfortunate incident of an inadvertent whack to the face from a fellow schoolmate trying to catch a ball – which knocked out my two front teeth and had them grow back – well, like this.

When I arrived at senior school I was gawkward. I was desperately trying to grow out the haircut and had fourth less teeth and a fresh set of nineties braces in my mouth. The ones you had to rub wax all over so you didn’t end the day looking like some kind of vampire fresh from the kill. In most British schools, there’s a time-honoured social hierarchy. At the top are the popular kids. These are the bullies. At the time, I though it had everything to do with looks and social life, but looking back, some of those bastards (mostly girls) were some of the ugliest people externally as well as inside I’ve ever known. I think it had more to do with knowing the right people, and behaving a certain way. Do like us, and be one of us. You’ll be immune. Then there was the other side. The bullied. The more intelligent kids who got picked on for reasons ranging from acne and unusual face structures to being too clever (and nobody wanted to be a boffin) or, heaven forbid, carrying a rucksack with both straps. Then there were the handful of kids who tended to attach themselves to either side – but weren’t full on bully or bullied. The ones who’d go around with the popular kids, but never actually take part in the instigating, or the ones who’d stick with the other side, not actually bullied themselves but firmly allying themselves to the right side. That’s where I was. I wasn’t bullied, I think because I was kind of a sweet, if awkward kid, but it broke my heart to watch my friends have things thrown at them, called awful names in class and publicly humiliated, racistly joked about or lock themselves in a toilet cubicle for hours they were crying so hard. Some of these people remain very good friends to this day. I guess something about shared pain building bonds, or something.

It was interesting that at this point in my life the effects hadn’t fully taken root to the point of damaging my own self image. I was able to function normally; I took swimming and figure skating and ju-jitsu lessons, I went to stage school, and put on Spice Girls shows for the neighbours. At that age, I still managed to be a relatively confident kid. 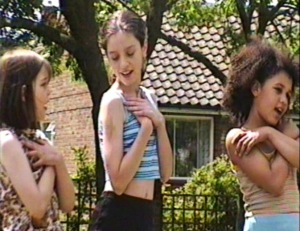 I moved to Canada at fourteen and was blown away by the world of difference in school culture. Kids weren’t divided into good and bad; kids were divided into a hundred types of person and style, and I couldn’t believe how welcomed I was into so many lives. I joined the IB programme, hung out in the physics room at lunchtime making science puns on the whiteboards, performed at a punk show with a studded collar to a drama hall full of students, marched in a fashion show and went on Shakespeare trips in snowy cabins. But amidst that, I think the seeds of self-doubt were sown – in addition to ones I hadn’t realised had begun to take root many years prior. My one insecurity in high school was my accent. Yes, people seemed to love it, but I’ve always been softly spoken. I remember in my first year there having to give a presentation in history class, and the teacher stopping me part-way telling me in front of everyone how I was talking too fast and too quietly, and how nobody could understand a word I was saying. I was different. Those words became branded onto me and led to years of terror when it came to speaking in front of other people. In a post from 2009:

[I’ve felt myself slipping. I see opportunities for me to grow and contribute as a person, yet feel crippled by the fear of what other people might think about me. What if I’m too quiet? What if my accent’s too strange? What if I speak too fast? All my flaws one high school history teacher had pointed out in front of the class during a presentation one time come flooding back, and I feel paralysed by anxiety. I can’t go for promotions or new roles at work, because they all involve speaking in front of others, or giving presentations, or talking at staff meetings. Heck, I can’t even give a coworker a goodbye speech after organising a group gift and making a big goodbye card. I’ve stopped going to devotions at work because I’m afraid I might get asked to speak. I try and avoid sitting at the back of the bus so I don’t have to use the back doors for fear they won’t open and I’ll have to yell “back door!” in front of a bunch of strangers. It’s ridiculous, and awful, and I can’t get over it.]

Not only was I exposed to the world of bullies throughout childhood, but I was exposed to words that stuck. At home, I could never compete with my younger brother. I was never as good or, in my eyes, as loved. At times I felt downright hated. The idea of not being good enough stuck well into my adult life, and affected every aspect of it. At work, I’d break down in fits of tears because I thought I was being judged poorly, or because I didn’t feel I was meeting standards – I believed the impossibly high standards I set for myself were equivalent to the substantially more reasonable ones set by those around me, and continually felt a failure. I felt for years that I was never good enough as a friend because I was different – I wasn’t into the popular stuff that most people enjoyed doing. I played video games and read books. I didn’t go to the mall on weekends and I didn’t go to parties on Friday nights.  Everyone else did, and that meant everyone else was more exciting than me. Everyone else would rather be friends with someone more normal. More exciting. The tumultuous events of my twenties led to several people cutting ties with me, and that only fuelled the idea I wasn’t worthy of friendship.

[“It sounds like things are really looking up for you and that you’re happy in your life right now and I think that’s fantastic. It took a long time to find what you were looking for, including relationship abuse, a divorce, a partner’s stressful family, coping with a boyfriend who has a debilitating condition and then when things got too much, what happened in December. Up until the very last point, I was with you every step of the way, but at the end of it all, there was just nothing left to give. If you have friends now that you know will stick with you through thick and thin and are the rocks at the bottom, that’s wonderful and it makes me really happy to know that you’ve found those people. With that said, I just can’t be that friend – I just don’t have enough in me to be what you need. I’m happy to see you if we run into each other and catch up, but that’s all that I have right now. I’m sorry if that hurts your feelings, but I respect you enough to be honest. I still think that you’re a good person and I’m genuinely happy that things are looking up for you. Thanks for understanding and I’ll see you around.”

But in the past couple of years, I really have found those rocks. And words cannot express my gratitude for those people.

I’m getting off topic here, but I want to summarise the main message and post this video again, not just because it does an infinitely better job of getting it across than I just did, but because it needs to be fucking watched.

We all have the capacity to change the world, to be mindful of what we put out into it, and to remind ourselves that no, words don’t die the moment they’re uttered. They just begin to live that day. And if they’re the wrong ones, they can eat away at self esteem and potential for years, and the long-term damage to a soul can be catastrophic. Don’t take part in what the “norm” has been for as long as I’ve been on this earth. Don’t let your children tease others, or tell them they need to toughen up if they fall victim to schoolground cruelty. Don’t give up doing what’s right for the sake of fitting in, whether at school, at work, or in your social group. Don’t sit by and watch it happen to someone else, because sometimes our silence can be equally as destructive. Don’t accept the way things are. Be aware of what you’re putting out into the world. And always, always stand up for the right thing.

Make sure they’re the right ones.