I’ve been meaning to write since getting back into Winnipeg on Monday, but said arrival was at about 3:30 AM and the last few days have been a whirlwind of playing catch-up to all the paperwork I didn’t do while I was gone, and all the sleep I didn’t get on my big American adventure. I’m still working on the latter. This past weekend’s trip was something I’d tossed out to a few friends a few months ago, primarily as One of Those Things you’d really love to do, but logistically would likely never happen – you know, stuff like travelling through time, solving a murder, raising your own ninja turtle or having David Tennant’s baby. So when it actually happened, it was pretty much the equivalent of waking up one day and finding out you’re Batman. Actually, let’s go with SuperTed, because he had cool rocket boots and a best friend voiced by the third Doctor.

This weekend, my best friend, her man, the Professor and I headed to Minneapolis to see my favourite band in the whole world. We got to the US border and were met by a typically burly and angry looking guard who proceeded to stand in front of the car with his arms crossed, not saying anything. Not having travelled by land to America in the last ten years, and definitely not having driven there myself, I had no idea what his problem was. He apparently had a series of problems, namely my Britishness, the fact that we had “lots of antiques” in the boot from the photoshoot (if a Dollarama decorative trunk that cost all of $2 and the complete works of Shakespeare count as antiques), that we didn’t know his silent frown clearly meant he wanted our passports, and most impressively, that we’d gone to the wrong border and didn’t have a map. We’d borrowed a GPS, not having realised you could choose between routes (shortest distance, fastest time etc.), and had followed the directions on the setting we’d presumed was the default. (Why would anyone want anything other than fastest time?!) It then took us an additional two hours driving through an endless time loop of several kilometres on US59 followed by a right on US59, a continuation on US59 and another left on US59, then a few more turns down the road on US59 (seriously, I’m pretty sure the name of certain area in the middle of a southern Nevada desert was a typo), but after heading due west to the Interstate, we finally made it to Minneapolis – two hours before show time!

The show itself was phenomenal. There’s nothing in the world like being in a room of people who share the same enormous passion for the same thing you do, enjoying the fact that people who make music that sets your soul on fire are ten feet away. I don’t think I’ve ever been so excited in my life. We bundled our way near enough to the front, and I took hundreds of photos and a few videos (on my new iPhone – why did I not get one of these before?) and then ran off to the side of the stage where they were packing up after the show. This was the part where I became possessed by the spirit of a twelve-year-old fangirl, lost the ability to voice anything resembling coherence or sanity, told them all how amazing they were and reached out to stroke the lead singer’s shoulder. What a creep! But my creepiness paid off, and after my friends interjected and showed that we actually were quite normal, we spent the rest of the show watching the other band, standing with my favourite band, talking about how they met, the fact we’d driven ten hours to see them (they felt awful!), and just music in general. I even had a photo taken with the whole lot – something I’m sure will rocket its way to the top of my list of Best Moments Ever and crash land there permanently. We all wandered around afterwards in a giddy euphoria, ordered the most amazing burgers I’ve ever had (delivered straight to our hotel room!) and collapsed in a happy exhaustion. 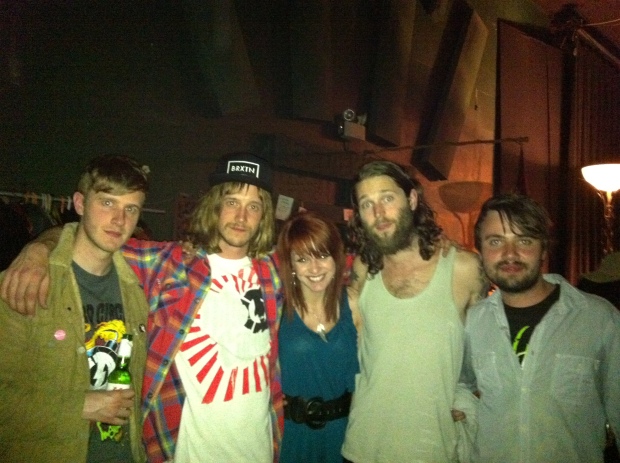 The next day, we checked out at noon and headed for the Mall of America, and learned that in America, speed limits mean absolutely nothing. First of all, they were in miles, and secondly, people seemed to add twenty to whatever the sign said showing no regard in the slightest for the safety of fellow humans. When we finally made it, we spent the day (yes, the entire day, and not the three hours that would’ve had us home before midnight) running around the indoor theme park, exploring shops made for writers (I want a dress made of stationery!) and sipping smoothies under the starry skies of the Rainforest Cafe. It was absolutely wonderful.

The ride home was faster,  but pit stops to toilets in the middle of nowhere (in the dark), the GPS guiding us off the road onto a grass hill surrounded by sleepy little houses that looked like the set of a horror movie (in the dark) – and then into a solid rock wall, added to high speed wakes of very large, very fast vehicles made it a little unnerving – but we made it back after hours of great music, plotting, copious amounts of sugar and a very bright Venus in the sky to guide us home.  We arrived at about 3:30 AM thoroughly exhausted, but it was so, so worth it 🙂

Now onto more adventures: in a couple of weeks, I shall be leaving Hobbit House and moving into a giant, sprawling, thoroughly haunted and brilliantly post-Victorian building. The apartment is the biggest I’ve ever seen – with three bedrooms (potentially four), two living rooms, a sun room, and a hallway longer than a bowling lane. The building has a courtyard inside (!) and is full of staircases leading to nowhere, doors opening onto brick walls, and it houses the oldest and creepiest cage elevator in the country. It has gorgeous wooden panelling halfway up the walls, an actual fireplace, and the bedrooms are probably bigger than my whole suite. I’ve already begun dreaming up evenings spent with typewriters and Merlot, covering my walls with the words of Shakespeare, and watching thunderstorms over the village this summer. It’s beyond perfect, and within a fortnight, it will be my new home 🙂

Hope you’re having a wonderful long weekend – and learn from my mistake: using pink icing in butterfly cakes unintentionally pays tribute to the whole fertility side of the Easter holiday, and may render your festive treats slightly NSFW. Oops! 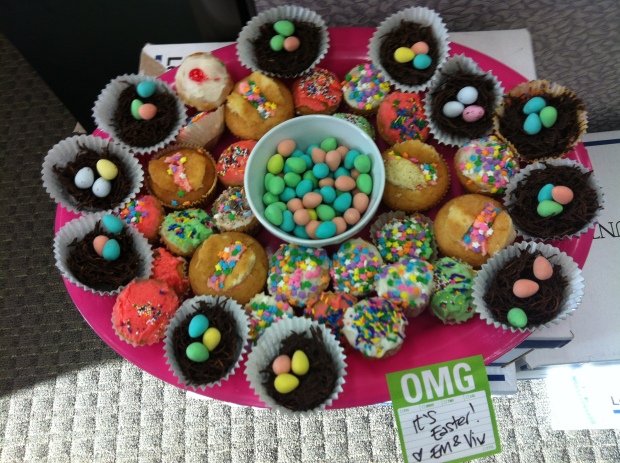