So…. last Tuesday night was the Big Tattoo Expansion Appointment. (For those who missed it, the story of why I had to get it is here.) And it can only be described as one of the most epically awful experiences ever.  I’ll spare you the details of everything I’ve done over the last few years to try and lessen the back pain – you already know I’ve seen more specialists than Heidi Montag’s seen the sharp side of a scalpel. But despite the difficulty, I was determined to get this monstrosity made into something meaningful I could be proud of again.

Monday night, avoiding all advice against psyching myself out, I got barely a couple of hours sleep in apprehension, tossing and turning until about 2am. I spent most of Tuesday researching options for lessening the pain of tattooing over skin that’s already extremely sensitive, bought a topical anaesthetic which would supposedly numb the skin… only to be told by the tattoo artist around lunchtime that it was a bad idea. It would be great if my procedure was going to be less than 45 minutes. Otherwise, for the remaining 2 hours, as it started to wear off, I’d feel all the pain I’d previously been numbed to on top of the new pain I’d be experiencing as he continued, and on top of the already existing condition, it would probably be “unbearable”. His advice: save it for when I come back to get chunks shaded in smaller blocks of time.

So Tuesday. 4:45 pm. I stop at an ATM, take out $300 and head over to the tattoo parlour, feeling slightly sheepish in a white tank top and a black and pink skirt.  They were playing Daft Punk followed by the Spice Girls though, so I couldn’t be that out of place.  They printed the oversized new design, and took me in to get prepped. I’ve had tattoos – I knew what to expect.  I was silently praying for a case of mind over matter, that somehow the pain would be lifted just for a couple of hours so I could get this taken care of.

It didn’t start off too badly, but about 15 minutes in he was already asking if I was okay because my back was “jumping” a lot. The muscles were going into spasm – just like they did for the longest time before I started going for regular massage at the slightest touch. My face was down on the chair; I held my breath hoping the tears would be held back too. 20 minutes in and it was already excruciating. He’d started way out over my left shoulderblade, it being the “better” side of my back, but as he got closer to the spine it became more and more unbearable. I couldn’t help the tears, and I felt like a spectacular loser. I’d told him about my back problem when I initially made the appointment, but I don’t know if he remembered.  I took a break, caught my breath, and decided to keep going. I found myself exhaling, afraid to take a breath in for fear of it hurting more, whispering “it’s okay it’s okay it’s okay” between needlings.  But it wasn’t okay. The muscles kept spasming, and then my whole body started shaking, just like when I got the cortisone shots.  I couldn’t stop, and suddenly I was taken over by fear and pain.  I knew if it was this bad on the left side of my back, the ‘bad side’ wasn’t going to happen. I’d been defeated.

I heard the artist talking loudly, words of this being “a first in all his seventeen years of tattooing” and how there’d be no way he’d ever be able to get it to line up again,” and how I still had to pay him for the whole thing despite only having a quarter of an outline finished. $320 including my deposit, and I left sobbing, my head flooded with all the old voices that told me I wasn’t good enough or strong enough. That not only was I going to have to continue to wear this badge proclaiming my past mistakes, but I have to add another to it, telling the world I just made another one, drawing attention to my former naivety, and ridiculing my present efforts at ridding myself of it.

On the way to the appointment, I’d come up with an idea I thought would help me through it. None of us can write a new past for ourselves, but we can make the choice to start writing a new ending. I wasn’t going to “erase” my past with laser removal, I was going to embrace it for the lessons it taught me, the person it made me, and add to it, it becoming part of something bigger and better, more meaningful; still there, comprising yet also hidden by the person I am today. I thought this would help me get through it, but now it feels like a punishment. That I must be made to wear this badge of past failures, and that I would be made to live with constant pain, day in and day out ensuring I cannot cover it up.

But I have to remind myself that nothing that’s worth doing is done easily. The process of personal transformation was sparked by things nobody should have to experience, though I’m not ready to share those just yet. The most difficult times have led to a determination to change them, and I’m confident I’m doing all I can to achieve that.  But it all seems so easy in comparison to ongoing physical pain, when all you want is for your body to have the strength to be a reflection of the person your mind has worked so hard to become.

Lesson learned? No, if the lesson is that I must resign myself to being branded with my past mistakes. I can’t do anything I can keep trying physical therapy, but I don’t know if it’s working. The effects are fleeting and expensive. I have to accept that in its current state, my back (and bank account) isn’t going to be able to handle another attempt at tattooing.  So, I must find another option. Laser tattoo removal? Perhaps. Though there are only two places in the city that do it – one accompanied with a barrage of horror stories, also costing an arm and a leg, and the other, a cosmetic surgery clinic, an awkward experience in that I worked there for all of three days before quitting based on moral objections. Wouldn’t that be fun to go back? Apparently it hurts just as much, and is just as expensive, and would take just as many sittings as finishing the tattoo. Which apparently can’t be done, because “there’s no way my back will be able to take it in this condition, and there’s no way the design would be able to be lined up again.” 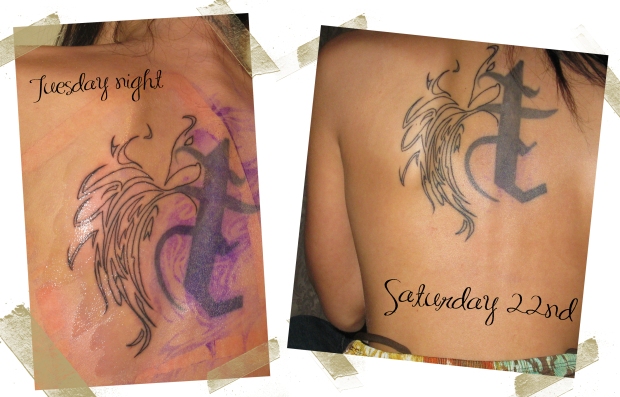 This is what I am left with.  It looks strange and unattractive, but isn’t that often what the road to growth is?  It’s not cookie-cutter, it’s incomplete, and it’s not something, at first glance, one would wish for. But it’s real. It’s a representation of a determination to face my past and embrace it, and of trying to make it part of who I am no matter how painful the process. On Wednesday I met with another tattoo place, somewhere infinitely more understanding, more welcoming, with more impressive portfolios. I was told about the options of going to my doctor to get some strong pain killers prescribed before coming in, and that yes, they could work in small sections – but it was going to be incredibly costly to do it that way.  At this point, I’m not sure what I’m going to do.  But until I figure it out, I will wear this disfigurement knowing that one day, with guts, strength and tenacity, and  it will become something beautiful.