A few weeks ago, I had a bunch of really good news.  We’d booked our trip to England, I was starting my new position at work, Nan was doing better, we’d signed up for dance classes, and I was just about to start my Creative Writing class.  Since then, things have continued to be great.  We’ve discovered Sweet is, hilariously, a NATURAL at ballroom dancing (while I’m still stuck on which foot goes backward) – but each class has been filled with fun and laughter, and it’s the perfect way to start our weekends.  I also phoned my Nan last week – and not only was she thrilled, but apparently she’s well enough to go home – to HER home, not a care home! – within the next two weeks! Work is going well, we’re making all sorts of plans for the UK trip, and Creative Writing class? ALL sorts of awesome. 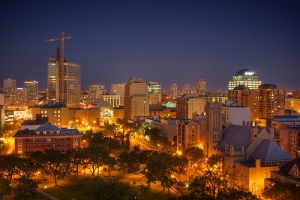 I’m going to tell you a secret: I never finished university. I grew up hugely academic, spending my high school years continually on the honour roll and spent Saturday nights in the university library, reading Chaucer for fun and gazing out at the city’s skyline, as the sky turned from pinks to blues and the streets below came alive. I loved school. I love to learn, to challenge myself, to succeed in something I adore – but at 20 years old, life started to happen.  I’d moved out just as I turned 19, with A Boy, which lasted about a year – we broke up, and after a short stint on my parents’ sofa , I got my first apartment. I was working part time, and had no savings – or furniture – so I reluctantly decided to take some time off from school, get my life in gear, and work for a little bit in the Real World.

I was lucky enough to find jobs that led me toward graphic design. In school, I’d been studying medieval English literature and psychology – which would serve me really well in the real world [ahem] – but through work, I found I loved graphics. I was offered real-world experience, networking opportunities, and the chance to build a real portfolio.  This led me into marketing and advertising, which I adore – but I’ve also realised I have a passion for writing. Blogging has become just about the best hobby I’ve ever had, but I’ve always secretly loved to write fiction, too. I get lost in the worlds of incredible authors, surrendering my mind to their vivid imaginations, and longing to visit these fantastical places in the real world. I love the art of crafting a piece of prose as that’s as beautiful as a masterpiece painting. I love the English language.

Mr Flay appeared to clutter up the doorway as he stood revealed, his arms folded, surveying the smaller man before him in an expressionless way. It did not look as though such a bony face as his could give normal utterance, but rather that instead of sounds, something more brittle, more ancient, something dryer would emerge, something perhaps more in the nature of a splinter or fragment of stone. Nevertheless, the harsh lips parted. ‘It’s me,’ he said, and took a step forward into the room, his knee joints cracking as he did so. His passage across the room – in fact his passage through life – was accompanied by these cracking sounds, one per step, which might be likened to the breaking of twigs.
– From Titus Groan by Mervyn Peake

Isn’t it beautiful? (The text – but yes, Jonathan Rhys Meyers was in the miniseries, we can refer to  him, too :))

So two weeks ago, I started my Creative Writing class. I had all sorts of hopes of meeting new people, of indulging my creative passion, and of a place my imagination could really take flight.  The first class wasn’t quite what I expected – I don’t think the instructor expected a group of only six, either! – but I was in my element.  I’m not usually one to pipe up in groups, but I instantly felt comfortable in a place where creative thinking was encouraged and praised.  In class, we all have to read our assignments and classroom activities out loud in front of each other.  This is slightly intimidating – but I’m hoping may be just the ticket to keep me going on the whole breaking free of fear journey.  Last week, we had to write a “character”, which I initially struggled with – I wasn’t used to having such open-ended assignments! But the second I sat down to write, I couldn’t stop. I ended up with something I was really rather proud of – I can’t use literary techniques and flowerly language on the blog, but I indulged on my assignment. And it went down really well!

We were also told about our final assignment, due in about 8 weeks. It’s open-ended in that it can be a play, a short story, a review, a poem… anything we like. But we’ve been booked a spot at one of the city’s biggest bookstores, where we will do a reading. In public. This is quite possibly one of the most intimidating tasks I’ve ever been given.  The way I got through facilitating my classes at work was to tell myself I was in a position to pass along information that would ultimately help people.  The desire to help surpassed my fear, so I was able to do it, no problem.  But putting something I’ve created out there, where it can be judged by other people? SCARY.

I’m trying to tell myself this is just another stepping stone in my ongoing journey. That I’ve learned how to live without worrying constantly about other people judging me, so I should be able to do the same with my writing.  Hopefully the next few weeks will be practice enough that I won’t bomb it in the end… and I’m feeling a mixture of nerves and excitement.  Let’s just hope the latter dominates.  Until then… hold my hand?