There seems to have been an influx of amazing books, movies, and music in my life lately – incredible stories, stunning effects, brilliant lyricism, and sheer imagination that just make me want to give humanity a standing ovation. It seems almost unfair not to share the joy with everyone else! If you’re looking for recommendations, I’d highly recommend checking any of these out:
|

I’d originally seen The Ghosts of Belfast (“The Twelve” in Europe) last year in one of Chicago’s many wonderful bookshops, and had made a note to order it as soon as I got back home (I’d only taken a rucksack, which was chock-full by the time I had to leave!). Unfortunately, it wasn’t going to be released in Canada for another six months, so I pre-ordered it as soon as I could. The premise captivated me immediately: Gerry Fegan, an ex-IRA hit man is haunted by the ghosts of the 12 people he killed, and soon realises the only way they will give him rest is to systematically assassinate the men who gave him his orders. What a brilliant premise!

I’d never ventured into the realm of thrillers or crime fiction before, but when it’s mixed with otherworldly elements (and set in my favourite place on earth), it’s the ideal way to start. It took a bit of getting used to a story comprised primarily of heavy-cursing men and politics I hadn’t studied in as much depth as I would’ve liked, but I was soon fully absorbed in the characters, and literally read with baited breath through chilling scenes of a dozen ghosts miming execution around the men Gerry encountered. Neville’s writing is nothing short of brilliant, and imagery of “bruised” and “scarred” landscapes was a literary feast that added to the ongoing air of trepidation. The story is a haunting rollercoaster of suspense, forbidden romance, politics, survival and the supernatural, and ends with an extraordinary twist that’ll make you want to stand up and give a round of applause. 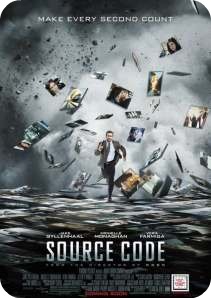 I don’t often watch movies, but last week we saw two that ended up being a couple of the best I’d seen in a very long time. I knew I was going to like Source Code as soon as I heard the premise: an action, sci-fi thriller revolving around a soldier who wakes up in the body of an unknown man, and discovers he’s part of a mission to find the bomber of a Chicago commuter train. He’s sent back into the last eight minutes of a passenger’s life before the explosion repeatedly until he discovers enough detail to find the bomb, and stop the bomber’s future attacks. Most of you will know that I probably wouldn’t need to even know the synopsis if a movie’s filed under “sci-fi” and “thriller” (Inception and District 9 are some of the best premises I’ve ever seen), and this was just another to add to the list. Great visuals of a city I’d fallen in love with last year combined with great imagination and another excellent twist at the end that left me thinking about it for days. Trekkies will be fans: the story was reminiscent of the Voyager episode Relativity where a character is sent back in time repeatedly to find a bomb and discover the identity of the bomber to stop the destruction of the ship. But this time, “it’s not time travel. It’s time… reassignment.” Epic. 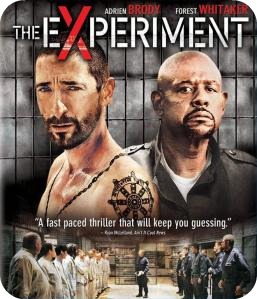 We also watched The Experiment, a remake of a 2001 German movie – a highly intense film about a real-life, controversial psychological study in which 26 men are chosen to participate into the roles of prisoners and guards for 14 days in an environment simulating a state penitentiary that ultimately spirals out of control. I’ve always liked Adrien Brody – he’s had interesting roles in several movies I personally enjoyed thoroughly, but seem to have fallen below the radar of critical acclaim (The Jacket; The Village), but this is probably my favourite performance of his. (Though this may have been slightly affected by his long hair and gorgeous tattoos). When I watched this, I had no idea it was based on a true story, which made the already frightening premise even more disturbing upon discovery, but the psychological aspect made it simultaneously fascinating and thoroughly gripping. Vanessa, this one’s for you!

Lastly, I can’t not mention my favourite album around at the moment. There was a tonne of hype about these guys when their first demo leaked on the Internet, and it started getting national radioplay before a proper recording had even been made! The Vaccines’ album, What Did You Expect from the Vaccines? is a short punch (less than forty minutes total, which each song clocking in around two minutes) of feel-good, infectious good old punk rock. And the first single off it is so catchy it makes me a)  jump around wherever I happen to be, b) air drum my arms off (or c) a frantic, flailing, highly attractive combination of the two) every time I hear it. We played them on the radio a few weeks ago, and even had people write in to ask for the tracklisting because they liked them so much! Crank it up!

What movies, books or bands are rocking your world lately?