…with my current name. In eleven days I will be marrying the love of my entire life, the one who has shown me more laughter, deeper feelings, bigger dreams, and magic realities than I ever could have dreamed of. I’ve been a little absent from this corner of the Internet lately, but all for very good reasons!

So I didn’t win the Searchlight contest. I did make the top Manitoba pick in the semi-finals though, and I did however also release the EP!! I needed to do this before 30 was up. From about last November to mid-June, we started with a living room cellphone recording of a song I was going to throw away, to a 5-track record that’s currently in international hands, in local shops, playing on some radio stations, and on iTunes and Spotify (please follow!). I can’t believe it. I can’t believe the outpouring of kindness, encouragement, time, and talent from others, half of whom I didn’t even know existed a year ago. I can’t believe people wanted me to sign it. I can’t believe some things I wrote on a tiny ukulele are now so full of depth and richness and other voices and instruments. I can’t believe it’s real.

How do you do justice to the amount of gratitude you feel when your feelings are so much bigger than the language that exists to describe them? I’m more than thankful. There’s no word for that. So many hours were put into this – not just by me, but by everyone involved – other musicians, my producer, who spent countless hours working not just on the songs but the videos too – oh yeah, there’s a new one of those too – all those involved in mixing, mastering, shooting, being on film, and everyone that came to the launch/birthday party. To have had a dream literally be plucked out of my head and taken safely into the hands of the most incredible team, and then given back even shinier and more magical than I ever could’ve imagined… it’s more than humbling. It’s a gift from the universe. 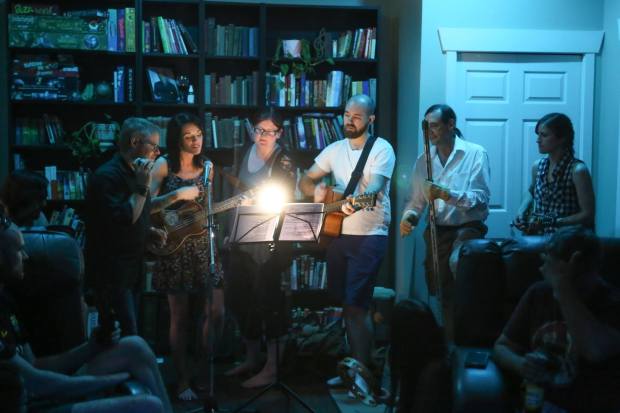 This video was released the same day as the record, and involved almost two months of filming, several trips to different parks and forests, lots of mosquito bites, singing in the woods to passers-by, stepping repeatedly in deer poo because I love being barefoot and can’t see anything without my glasses on, wood ticks, viking vests, piggy backs, drumsticks made of branches, climbing abandoned houses, and battles against the weather, but I am THRILLED with it and everything was so worth it. This one was directed, filmed and edited by Dave Swiecicki, mastered by Jamie Sitar, colour graded and stylized by Jeff Gordon of JAG Videos and Photography. Huge thanks also to Jason Gordon at Studio 11 for producing along with Dave, Murray Krawchuk, Luke Janzen, Sari Habiluk, Roger Fournier, Paul Little, James Culleton, Jason Gordon, Dale Brown, Rob Watson, Alex Edye, Rahim… and Robert Wilson for the use of his trunk! I hope you like it:

(Click here if you’re getting this via e-mail and the video isn’t showing :))

People seemed to like Polaris a lot, but the response to this one has been equally positive, which takes me by immense surprise considering it was the first song I ever wrote in my life!! It’s definitely come a LONG way (wanna see something terrible?? #progress!!), and it’s all thanks to the magic of what others can hear in something new, unfinished, and awful lol. I did a lyric post for Polaris, and I think it’s really interesting reading the story behind other artists’ lyrics, so I should probably do a quick one for this, too. Polaris was written about a job I quit because I was surrounded by people focused so much on the unimportant trivialities of life and losing sight of the big picture – it’s something I find we do all too easily, getting caught up in fleeting emotions that won’t be remembered a week from now, and I think it’s important to recognise that and ask ourselves, is this worth it? Because the answer is usually no, yet our pride convinces us otherwise.

The Triad and the Harvest Moon, as I mentioned, was the very first song I wrote. I wrote it just to see if I was able to write a song – if you know me, you’ll know that brevity isn’t exactly my forte, and it was a challenge to myself to see if I could tell a story in under four minutes. And somehow it worked! I caught the songwriting bug and I kept going. This was based, three years ago, on a midnight adventure I’d had with my boyfriend at the time. We’d gone for a walk down by the river, and there was this giant orange moon suspended in the sky. I’d like to think it was a harvest supermoon 🙂 We’d stopped to look at it, and from where we were on the path, the branches of a tree formed a triangle that framed it. “Triangle” had too many syllables, however, for my song 🙂 The chorus, about looking “to the stars, a reminder of the place that we call home” is a nod to the star stuff from which we’re all made; interconnectedness with other human souls.

It turned into a “very Manitoba” (as my neighbour said) upbeat folk love song, about new love, secrets adventures, and the beauty of the universe; one I’d like to think anyone in those new stages of excitement can relate to. It’s a happy song, not too entrenched with symbolism this time, but a hand clapper and hopefully a bit of a foot stomper. I hope you like it 🙂 Oh, and there’s a mailing list now! I’d love it if you joined. I promise no spam, only fun, news, events and adventures.

Now? Well, first step, get married, and then straight back to the studio! Three more songs are written, with another three underway, and the goal is to have a full-length album in time for the new year. If I can get a band together (we all recorded our parts separately at different times!), then maybe even some live shows. I’ve learned I can perform (something I never thought I could do) if I’m up there with other musicians, but I still struggle to do so solo. And I think that’s okay. Maybe I’m not meant to perform solo. Maybe I was just supposed to get these songs out into the world. And now they’re out there, floating about, falling into different people’s lives. I’d love to know where they’re being heard. In kitchens, cooking; in cars on the way to an adventure… the world becomes pretty magical when you’ve made something that wasn’t there before. Especially when so much of that magic is thanks to such an incredible team. Thank you, from the bottom of my heart, to everyone who’s shared this journey with me. So much love to you all.