The above Rumi quote, accompanied by this striking image, really hit home when I saw it floating around an INFJ Facebook group last week. I realised recently that I’ve reached a point in my life where though, up to this point, I genuinely feel I’ve been living with an open heart, something’s changed. And that something can only be described as having my heart be unbroken. Every worry, every fear, every last hurtful word that’s clung to the the inside and rooted itself deep inside, has been swept away, leaving nothing but a shining freedom the likes of which I’ve never known. 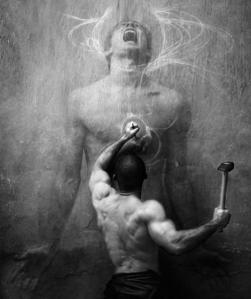 Words are my weapon, but they are also my kryptonite. Part of pouring my life onto public pages isn’t without risk, and though I’ve dealt with Internet trolls before, my absence from the blogging world has had the pleasant side effect of not really giving them enough fuel to stick around. And it’s been a while. But with my last post (which somehow got into the hands of various festival organizers and performers across the country, and landed me an offer to write for another upcoming festival officially[!])  came another attack, and of course it was directed at my newfound happiness. I had to remind myself that this is the Internet, and that this is the reality of the online world. It’s not personal. There are just people out there who actually enjoy trying to hurt people. But though I think I’ve grown a thicker skin than I used to, the words still stung.

I’ve been thinking a lot lately about words from the past and their effect on my current mentality. Words from my childhood, when I was called names in the school playground, or told by my own mother she felt sorry for whatever poor sod ended up with me. Words from former friends, telling me that although I was a wonderful person, my emotions and sensitivity were too much and that they’d rather abandon ship than have any presence in my life. Words from the friends and family of past partners that told me to go back to England because nobody wanted me in this country, or that begged them to leave me because I didn’t fit their mould. Words from exes, telling me repeatedly I wasn’t good enough as I was, that I had to be more to their liking, or telling me to shut my mouth and stop being a little bitch as they pinned me to the floor. Words from teachers as a newly landed immigrant, telling me to speak up and slow down because nobody could understand me, and a class in its entirety laughing in retort. Words from the well-intentioned, telling me I couldn’t possibly go after my dreams. And words from the Internet. Today.

There’s great power in words. They can capture the fragments of human emotion and weave them into something that can light the fire of the very soul. They can express the deepest of love or create the most vivid of imaginary worlds. But they can sting. They can burrow their way into a soul and masquerade as truth, distorting their entire world. The seeds of a person’s destruction. The below video served as inspiration for this post, because it’s true: children believe what they are told. And when those beliefs are formed early, when that foundation of thinking has been laid, it’s easy to fall into the trap of believing every negative thing ever thrown your way. To this day.

Now, I did begin this post with a quote that at first may seem morbid, but the instant I read it, it struck a chord. I’ve had to have my heart repeatedly bruised, beaten and broken over the years in order for it to finally, truly open, and its opening has been the most incredible thing I’ve ever experienced. Finally, it’s open to the truth. Yes, children believe what they are told. But children grow into adults and those beliefs can become the lens through which life is lived if reinforced and accompanied by a lack of self esteem. But the good thing about having this history, this damage, this repeated hammering at the heart, is that one learns the value of contrast. Only through the darkness can one truly define where the light is, and for the very first time, that light is shining brilliantly.

My heart has been broken to the point of finally opening, and with an open heart comes an eradication of everything that was ever false. A new lens through which to see oneself, and the world. A new way of thinking, and feeling, and believing. An heart broken open so wide that everything that was ever bad had no choice but to spill out, leaving a new vessel into which new truths are repeatedly poured with such passion and determination that I have no choice but to believe them, and remind myself every day that I’m not dreaming. I feel like the luckiest soul on the planet, and words cannot convey the depths of my gratitude. Fears, reluctant acceptance, self doubt… they’re all being erased, replaced with encouragement, confidence, connection, and an actual transformation.

The quote and the advertisement are most definitely disheartening in nature, but simultaneously can, if you let them, offer a glimpse of hope. That things can get better. Be careful with your words, for what you send out into the world may land somewhere it’ll stick, and you may move on with your life, years later in obliviousness to the effect they may have had, or may begin having, on the course of someone’s life. But even for the most sensitive of souls, words don’t have to be your shackles, no matter how heavy they weigh down. At the right time, perhaps with incredible luck and a little orchestration of the universe, they can also set you free.

“Nothing happened. And everything did. Your whole life you can be told something is wrong and so you believe it. Why should you question it? But then slowly seeds are planted inside of you, one by one, by a touch or a look or a day in a park, and they start to burst out of old hulls shells and they start to sprout. And pretty soon there are so many of them. They are named love and trust and kindness and joy and desire and wonder and spirit and soulmate. They grow into a garden so dense and thick that it starts to invade your brain where the old things you were once told are dying.”