Today the lovely Melissa over at Press Play is featuring this post as part of her 5 Songs That Changed My Life feature. Melissa’s life is FULL of music, and she shares the same passion for it I do, except she gets to work in the industry and do things like meeting Ed Sheeran too!!

I had to sign up for it the moment I heard about it. Nothing has had a big an impact on my life as music. I’m a pretty emotional person, and it’s something I’ve struggled with most of my life – I always liked to imagine a sort of emotional spectrum, and where I think it’d probably be easier to lay close to the centre, in the neutral zone far away from the depths of feeling (because things can get pretty dark sometimes), I don’t think I ever could, because you can’t have the soul-igniting, heart-exploding highs in life without also experiencing the lows. And I wouldn’t trade those for anything. I am going somewhere with this – and it really does tie in to music. For every experience I’ve ever had in life, every feeling, every hope or dream or period of exhilaration or loneliness… for every emotion this heart is capable of feeling, there’s a song that can speak straight to it. Music isn’t just the language of love, it’s the language that penetrates your very soul if you let it, and I cannot convey the amount of enthusiasm and respect I have for those who’ve written words and put them to music in such a way that it’s like a direct channel to my soul. (I swear I’m not this weird in real life… just incredibly passionate about the magic of what us humans can create and express in this form of art.)

It was really hard for me to narrow it down to just one Frank Turner song, because he’s one of those modern day songwriters that just gets it. Just gets exactly how it is, exactly what’s wrong with the world, exactly what’s worth singing about, exactly what’s important in life, and there’s no overproduction or forced melodies – it’s a simple English bloke singing songs about what really matters, and he has a way of doing it that just makes me want to ingest every lyric and with them wallpaper the insides of my head. A couple of favourite lines from other Frank songs include “it doesn’t matter where you come from, it matters where you go; no-one gets remembered for the things they didn’t do”, along with “I face the horizon, the horizon is my home”, and “It won’t last, so be bold, choose your path, show soul, live fast and die old,” but I find this track a great reminder for when things may get difficult in life, or you’re feeling low or questioning choices you’ve made… this song always helps me really re-focus on the good things to be thankful for that exist every minute of every day.

“If ever I stray from the path I follow
Take me down to the English Channel
Throw me in where the water is shallow
And then drag me on back to shore!

I knew I’d have to pick a Kate song, and though this isn’t my favourite of all, it is the one that without fail always leaves me absolutely sobbing. As you listen to her remarkable voice sing a chorus that absolutely penetrates your heart, you can’t help but feel a sense of urgency in life, to not let it go to waste… to tell those you love how much they mean to you, to live these moments we’re given and build a life you can look back on without regret… to always express. Always, always express.

3. The Cinematic Orchestra – To Build a Home

This song just stirs something within me that transcends the lyrics themselves, which I wouldn’t go so far as to say have “changed my life”, but every time I hear this song I feel drenched with a cold awe. Every once in a while a song will come along, stop you in your tracks and burrow its way into your ears, then your heart, then every fibre of your skin, making every hair stand up straight on the end of a thoroughly haunted and mesmerized goosebump. This is raw and beautiful, and something about this voice, and the soaring beauty at the chorus end as it fades into the softest of next few words… it’s beautiful. I don’t think there’s an official video, so I wouldn’t read too much into this one, but just close your eyes and turn this up and lie down somewhere comfortable and enjoy something magical for the next six minutes.

4. Mumford and Sons – Roll Away Your Stone

Again, it was far more difficult than it should be to narrow it down to just ONE Mumford song… this is my all-time favourite band. I remember when I first got Sigh No More… it was  the perfect balance of heart-wrenching, goosebump-inducing, earnest longing with a heavy dose of bluegrass and roots, dominated by thumping kick drums and a killer banjo (yes, really) that had me cranking my speakers and jumping around the living room. It was an extraordinary debut; a stunning combination of the expertly crafted upbeats and raw, emotionally ripping passion, each song fully able to stand alone as a fabulously crafted masterpiece… I went to see them before the first album was released in North America at an intimate little venue in Toronto back in what must have been 2009? It was one of the most magical experiences of my life. I remember writing at the time: There was an excited, energetic buzz filling the room; they commanded the crowd dressed in vintage waistcoats, rotating instruments, and had the crowd jumping up and down pumping fists while on the edge of their seats two tracks later in awe at the raw passion, soul and mastery of lyricism in front of them.  It was nothing short of stunning, and I hope they get the worldwide recognition they deserve. I’m SO glad they exploded.

This song is one of my favourites not just because of the build up that leaves you breathless, but because of the artfully constructed words, the melody, the combination of everything all in one song that hit really close to home. To me, it’s about being afraid… the fear of being isolated with only your own heart for company. In the past, that’s been a daunting, dark, prospect, and I think the verses capture the fear incredibly. And then the song just builds up into a “fuck it, there’s a whole world out there and it’s brilliant and I’m going to fill my soul with that instead” crescendo of awesomeness that just makes you want to shout YES right along with it.

“Stars hide your fires, for these here are my desires
And I won’t give them up to you this time around
And so I’ll be found with my stake stuck in this ground
Marking the territory of this newly impassioned soul
And you, you’ve gone too far this time
You have neither reason nor rhyme
With which to take this soul that is so rightfully mine” 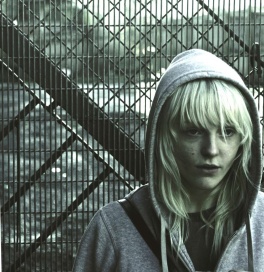 5. The toughest one! There are at least another twenty songs I could probably list; but I’m trying really hard to focus on ones that have had impact rather than ones I’d just love to broadcast to the world because they’re damn good songs. The honour of the last spot I think has to go to Laura Marling, because her words, especially from such a young girl, are so incredibly wise and beautifully poetic. Hope in the Air was a close second, and is a brilliantly written tale that’s a story in itself (and contains one of my favourite lyrics and haunting melodies ever):

“Our hearts are small and ever thinning,
There is no hope ever of winning,
Oh, why fear death, be scared of living”

But I ended up choosing Rambling Man – it speaks to me on so many levels, from the opening verse to the defiant chorus all the way through (excerpts below).

“Oh, naive little me
Asking what things you have seen
You’re vulnerable in your head
Where you’ll scream and you’ll wail till you’re dead”

Beaten, battered and cold
My children will live just to grow old
But if I sit here and weep
I’ll be blown over by the slightest of breeze

As someone you don’t want to be”

Transformation is an incredible process, and I adore her determination in this song to become more than those negative voices in our own heads that tell us our limits, not our capacities. To get to the other side, and above all, to be known.

I hope you enjoy these as much as I do!