Last time I wrote, I believe (it’s hard to keep track of because I’ve been privately publishing small “performance diaries” to chronicle this journey from the get go), I’d just decided to team up with a good friend and form a band together. I was all sorts of terrified and simultaneously excited at the possibility of something I’ve always wanted actually materialising, but most of all I was baffled that someone who’d actually been performing and writing/recording music and in other bands wanted to start one with me. The goal was two cover songs at an open mic – incidentally one of the things on my 30 Before 30 list.

And it happened. I didn’t throw up this time, but I did completely over-analyse it afterward and burst into tears, thoughts of having let my friend down flitting about my head along with worrying about if I was awkward on stage, if I was too stiff, if I sounded any good… people kept telling me it was great, but it was like their words were being thrown at my brain which had built a solid, impenetrable fortress around itself and couldn’t hear any of it. Then it happened again. I went from not being able to physically face the same direction or look at my friend to actually enjoying getting together to jam. There was something magical about having a far better musician than me actually be willing to sing and play songs I’ve always wanted to right there with me, and I’ve always been a sucker for great harmonies, and ever since we’ve been performing, I’ve lost count of how many times people have said how perfectly suited our voices are to each other. And it’s really difficult and strange and bizarre… and kind of amazing to keep hearing when your brain has told you otherwise for so long. 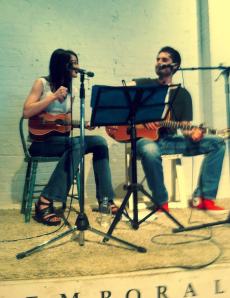 It’s been six weeks, filled with many jamming sessions, a handful of performances, and an almost complete turnaround in belief – I’ve always felt I was too quiet, too soft, too nervous, and too doubtful to ever fully sing properly. But even though I still wish I had a bigger voice, or could play more instruments, or could commit songs to memory in a heartbeat, the love of doing something has finally, finally outweighed the fear. Last performance was my first ever in front of the biggest audience yet without the safety net of lyrics and chords in front of me. We did an Imagine Dragons song and made it completely our own and I don’t think I forgot a single word. Afterward I noticed I hadn’t needed my water, which I’d chugged the time before because my throat was so dry with nerves, and I noticed I wasn’t shaking with post-performance analysis and anxiety, I was actually REALLY HAPPY and excited that I’d just done something I really never, ever thought would be possible. My heart wasn’t sinking to my feet any more. It was bursting with joy.

I was reading a blog post today from someone I am beyond proud to know, and these words struck such a chord (I swear that wasn’t intended):

Whether you’ll admit it or not, there are dreams you’ve kept since childhood. There are things out there that make you come alive. There is a burden in your soul that feels like its been lit on fire, and it makes it difficult to speak, and you fumble for the words, and you ache to quench the thirst. That’s not your heaping serving of cliché for the day. That’s just the truth. The truth, the truth, that we are often made for things so much bigger than we ever allow ourselves to have. We get small doses. We get little reminders. But honey, honey, what could it look like if you just opened the flood gates and let the passion pour out.

I felt that passion come pouring out when I finished my first short story. I feel it now I’m 30,000 words into a book in which every strange twist of my imagination is allowed to live and breathe forever. Once you hit the point of taking that step over the edge, into the unknown, and you realise it’s actually okay – it becomes a fuel to keep going. People always say things like “feel the fear and do it anyway”, “what have you got to lose”, or “what’s the worst that could happen?” But I thought to myself the other  day, before a practice session, perhaps some better words might be along the lines of “…but what if it’s brilliant?” Everything you ever try has the possibility to turn out a million different ways, and we have such a tendency to believe our capacities are far less than our true potential. We’re conditioned to believe it’s almost arrogant to go into something new thinking “I might be kind of good at this”. And so we don’t. We go in scared, if we even go in at all, because then at least if it does suck, it’s not like we didn’t expect it. It’s a self preservation thing; a mask that’s been so tightly glued to our faces that even we’ve forgotten it’s false, and we believe it. We believe that we are small. And we let those beliefs shape everything we’re ever brave enough to try.

I don’t know if anybody’s watching this season of The Voice UK (shh, guilty pleasure), but I remember seeing this little Irish ginger kid with a guitar auditioning with an absolutely arse kicking version of an Ellie Goulding song of all things. And he just WENT FOR IT. I looked him up on YouTube afterward, and he does it all the time. He doesn’t hit half the notes, but it doesn’t matter – his enthusiasm and commitment to just pouring that passion out into the world and rocking it is all he needs to just be absolutely brilliant. And he’s kind of become a bit of an inspiration. Every time I get nervous about hitting a note or trying a new song for the first time, we talk about “just gingering it”. Not thinking about nerves or worrying if it comes out wrong, just letting the excitement and love of music and hope for something awesome come out instead. And I think when you do it that way, perfection doesn’t even matter. My whole life I’ve been scared of showing anything I’ve created to anyone unless it’s 100% perfect first.

I’ve spent the last six weeks learning how to jump in unprepared and ride on hope and enthusiasm and trust… That’s a big one. Trust in other people’s words for the first time, that maybe I’m not that awful at this thing I’ve wanted to do so badly for so long. I know I have such a long way to go. I need to learn more chords, I need to learn how to write a song, I need stage presence and I need to strengthen my range. I need to stop doubting and being afraid and just keep focusing on the passion and forcing myself to keep doing it. With writing, and with music… I’ve been wired with a longing to dive into them both, such a strong, deep desire to create, to get what’s on the inside of this head out into the world… I suppose some of the very same reasons I started a blog in the first place. To prove to  myself and to the world that what was on the outside, or what I saw in the mirror, wasn’t truly what existed inside. Wasn’t what I truly was. Another few words from my wise friend seem applicable here, too:

We’re all a lot deeper than we give ourselves credit for. And we live within a world that never lets us fully know that. It’s a culture that keeps our intensity, and the fire in our eyes, and the lost hope in our bones at bay because shallow sells and the harder questions make us wince. But you, you, will always be hungry to go deeper than this world has ever let you believe you could. Going deeper isn’t easy. It’s not pretty. But it is so, so, so, so, so, so, (so, so, so) life giving… This world is much, much shallower than your sweet identity.

And maybe you already cry over that at night. And maybe no one ever thought to tell you but, yea, you’re kind of deep. Deeper, deeper than you even allow yourself to see. But the scary truth in all of it is that we have to be the ones to wade out into deeper water…. If you choose to walk forward, leave some of the smallness behind, plenty of others will stay to pick up your load but you’ve got be the intentional one in all of this. The one who sets the space for something more. Or else, you’ll stay a clam shell. You’ll stay surface level. And no one will ever fault you for that but you’ll probably start to feel those concrete shoes getting buckled to your feet when you look at your hands and ask, wasn’t I supposed to do something more with these?

Diving inside to retrieve that passion and intention has been a long time coming. Words cannot express how happy and free I finally feel, but moreso, how grateful, for those around me who’ve been my safety nets. My cheerleaders. Those who’ve made it their mission to get me to see that maybe I really can follow my dreams after all. We only have one life. And it absolutely cannot be guided by, or wasted on fear.