My coworker sent me a link today that stopped me in my tracks. I took six minutes and thirty seconds out of my workday (sorry, boss) and watched the video that I made a note to write about the second I had a chance. Well, I just got out of the bath (that I got bored in because I could have been writing this), shoved my dirty dishes aside for later (sorry, Mike), and sit here with sopping wet hair because I have to get this out.

I realise this is geared more toward women, but are we kidding anyone if we say men don’t suffer from feelings of low self esteem too? I watched this and it brought tears to my eyes because I know had I been involved in this, mine would’ve been on the drastic side. I imagined myself going in with my best friend and both of us taking part in the experiment. I imagined the portrait resulting from my description of myself, and the one resulting from hers. I know mine would’ve been ugly. It would’ve had a big nose with an ugly bulb on the end, a pointy chin that juts out so much you can physically hold it, bags under my eyes and hair that refused to look clean. If it were a full length portrait, it would’ve had an exaggerated pear-shaped frame, with no chest or shoulders, enormous hips and thighs twice the width of the torso. It would’ve had crooked teeth and eyes that were differently sized from each other, and in between deep-set laughter lines far more carved than they should be for my age, would sit an awkward, lop-sided mouth. My self-described portrait would look like a character from a cinematic adaptation of a Neil Gaiman novel.

Did you watch the video? This will mean nothing to you if you didn’t. Here.

“The video features an FBI forensic artist, who sketches portraits of women based on the physical descriptions they give to him of themselves.  He never sees them during the session.

The same women were also asked to spend some one-on-one time with another participant. Afterwards, that person also gives the artist a verbal physical description of the woman with whom they met.

At the end, the women are confronted with the two sketches, side by side. In every case, the sketch created by the artist from their own description is harsher and less attractive than the sketch he creates based on the description given by the other party.” – Maclean’s

My friend’s description of me would look wildly different. As the experiment proved, all the flaws we see as such a huge part of how we look are invisible to others. Even strangers. We may think ourselves the most awkward, disproportionate, skewed version of what should be beautiful, but in reality, nobody sees it but us. My description of her would be the most beautiful of them all, but I’m afraid hers would be just as self-critical as my own. Because we all do it to ourselves. 96% of us, anyway. 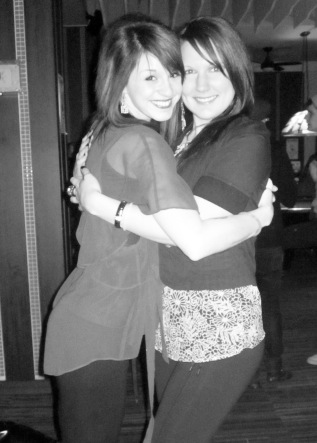 The experiment states that only 4% of women consider themselves beautiful. The experiment, though brilliant, is also only measuring physical attractiveness.

In a strangely timed coincidence, as I was taking a (let’s say coffee break; I’ve been working like a packhorse these last few weeks) few minutes, I was also having a conversation with a friend about my fears of performing. I remember talking about my blog, and why I started it in the first place: because I wanted the world to see beyond my projected insecurities and into the heart of who I really am. This blog has become a journey of goals and dreams and struggles and hopes and challenges, but most of all of determination. A determination to get what’s on the outside to match what’s on the inside. And vice versa, as the situation may present. We were talking about singing and performing, and I’d just been left with a new message, ending thusly:

PS. I saw your video of the Damien Rice song. I love hearing your voice, and seeing you play!! Thanks for sharing that. I think you’re getting better. Or maybe more confident. Could it be both? Yes, I think so.

Watching my YouTube channel back from when I first picked up the ukulele is kind of embarrassing. I struggled so much with the thought of anybody hearing me that I’d make this weird effort to be as good as I could… while avoiding the risk of being heard. Anyone who does music knows this is as ridiculous as going ghost hunting in the middle of the sunniest day of the year somewhere in the Mediterranean. I was going through the motions but my nerves held me back from diving in headfirst. I wanted to be a good singer, but I was too scared to practice in a building where there might be other people. I still struggle – we all remember the throwing up incident after I performed at an open mic for the first and only time – even last night, I made everyone would be out of the house for a good couple of hours before even attempting to sing. But then I did, and it was in an actual house, and I didn’t feel afraid, because there wasn’t anybody there. (Except the cat, but she’s a fan of pretty much anything in the world.) I let what came out on the outside actually be what I felt capable of on the inside. It’s still not great, because I don’t exercise the vocal muscles in a way that might make it good – but the end result was a match. A match between where I thought I could be right now and where I actually was. And wouldn’t it be incredible if Dove could conduct an experiment that showed the difference between how we view ourselves mentally and how we come across to the world? To illuminate the discrepancy between self-imposed distortion and how everybody else sees us?

I remember doing a writing exercise once where the instruction was to write a description of yourself from somebody else’s point of view. It could be a friend, lover, family member, or complete stranger. I remember being in tears after I was done because I realised how distorted my self image truly is. I don’t know why, but this experiment has shown me just how normal it is to degrade ourselves. We are never good enough, beautiful enough, confident enough, or smart enough. I thought it was something I dealt with alone, but this proves that most people see themselves as less than they actually are. And that’s horrible.

The proof is in the brilliance of demonstrations like this.

Now, completely unrelatedly, and because everybody deserves at least one laugh a day, I discovered something amazing about the voice control capacity of my new car this afternoon. I can’t wait for everyone else with a new Fiesta to discover this too. Enjoy 🙂