Over the last few years, I’ve become ever more interested in the world of psychology – how our minds work, how personality types determine our social functioning, and the reasons behind why a comment made to one person may get laughed off, and made to another may cause them to break down in tears. I’ve been spellbound by the behaviours of introverts and extraverts, and lap up anything I can get my hands on that leads to a better comprehension of myself, and of the world around me. More knowledge leads to more understanding, which leads to more confidence, right? Throughout childhood and adolescence, I didn’t understand why people did the things they did, and my natural reaction was one of opposition. I’d like to think that now, halfway to thirty, with a bit of education as my weapon, I can face the world a little more prepared, understand actions a little better – and deal with situations in a much more adult way.

But for all the studying and human understanding in the world, there will always be something that lies beyond the realm of our control: our genetic makeup, and how the world reacts to it. It’s no secret I have issues with body image. It’s no secret that the majority of people do. My problem is that I it’s something I can’t control. With relationships, personal struggles, fears or inner monologues – everyone can consciously make a choice to deal with things differently as the situation requires. We even do it subconsciously every day – we’ll leave the office wishing our boss a delightful evening, in our button-up shirts and pencil skirts, only to get home, change into pyjamas, and start cursing like a sailor, because our target audience is different. We act differently depending on who we’re with so we can best fulfill the image we want the other person to have of us. But what happens when it’s something you can’t control?

For my entire adult life, I’ve encountered one situation repeatedly: Based on how I look, people think I’m far younger than I actually am, and consequently react according to their preconceptions. I don’t get taken seriously. I’m almost a decade over the legal drinking age and get ID carded every time. In my early twenties, I worked a reception job, and had people come in asking if I was “the boss’s daughter”, thinking I was on work experience through  high school while someone else ran the show. A couple of years later in a similar position, I even had someone refuse to deal with me “because I didn’t look old enough”, and actually request someone who was “at least forty” – who gave them the exact same information I already had.  In facilitating workshops, or teaching classes, I have the hardest time because all my students are older than me – but an even harder one because I have to fight their initial impression that I can’t possibly be old enough to be a) in a position of authority, and b) know what the heck I’m talking about. It’s been my biggest roadblock my entire professional life: looking like I’m younger than a high school grad makes people not take me seriously.

I try to look more “adult” in the workplace. Where others are in baggy jumpers, I wear blazers. Where others are in palazzo pants, I’m in pencil skirts. Where half my colleagues can shop at Giant Tiger across the street and still get taken seriously, I make regular stops in my overdraft spending money on business staples that will hopefully give the impression that I’m just as much a professional as anyone else. A couple of years ago, I took over a Coordinator position for someone going on maternity leave – and though continuing the position identically, my title somehow converted to “Assistant.” Why? Because you have to appear older to qualify for a more impressive job title? I keep my hair long and dark, because with it up or short, I look even younger. Once recently, my supervisor caught me reapplying red lip colour. “Are you wearing lipstick?” she asked, in a manner reminiscent of a mother catching her child for the first time with a face full of her blusher and blue eye shadow. This past Friday, a government official was on a tour of our office, at the end of which she took the time to ask how I was in this position, because I “barely looked fifteen.” On our honeymoon, when booking a spa day, several members of staff actually asked me how old I was. What, because I looked like a child that couldn’t possibly have got a trip to an adults-only resort on my own? I’m sure no other guest was asked their age on that resort, just as I’m sure it wouldn’t even be mentioned if another member of staff were reapplying their makeup. 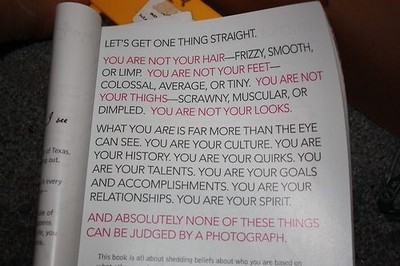 Perhaps this is one of the reasons I write, and I encourage real-life people to read my blog, too. It feels like if someone can see I actually do have something intelligent to say, or an adult opinion worth reading, then somehow they’ll take me more seriously. It’s almost like I want my writing, and what’s inside to make the first impression, because the reaction to the phsyical one isn’t what I want it to be. People always laugh, and tell me I’ll “be thankful for it when I’m forty”, but what about now? What about the CV full of job titles that don’t accurately describe the responsibilities I have, or the lower salary I’m paid because I appear younger than my colleagues?  What about the years of having to work twice as hard to earn people’s respect, just because I look like I’m fresh out of high school? For years, studies have shown that women are paid less than men. I’m certain the same goes for those within the same sex who differ based on how “mature” they look, too. A growing body of research also supports the notion that physical appearance is directly correlated to job success, and managers are basing hiring decisions somewhat on how somebody looks – and not just in the outfit department. Women are being fired for being overweight, underweight, not attractive enough, not mature looking enough, and even too attractive and “distracting” to other members of staff. Perfectly qualified people in their mid-twenties are being overlooked because they look younger, and therefore less qualified, for jobs they can do just as well as – if not better than someone twice their age. But of course, nobody admits this is going on. Nobody wants to admit that important decisions affecting the course of somebody’s life can be based on something so frivolous as physical appearance.

So what’s a late bloomer to do? I can’t control the fact that I’m short or small any more than I can control people’s reactions to my genetic makeup. I can buy all the business suits, high heels and push-up bras in the world, but it’s not going to change the fact that underneath it all, my face is a traitor to my age, experience and intelligence. How do I get people to see me for what I really am, and not what I appear to be on the surface? How does what’s inside emerge victorious in the realm of the first impression?