I’ve been pretty absent over the last week or two. The last little while has been brimming with laughter, tears, frights, delights, and of so much activity I haven’t had time to write – so I think the best thing to do is sum it all up in snapshot form. Let’s start with Christmas. It was our first as a married couple, and I’d had lots of tips offered from all over the blogosphere as to how to spend it, for which I was really thankful. A good point was raised – that now is the time to start our own traditions as well as continuing some we’d grown up with – which was interesting, since our childhood Christmases couldn’t have been spent more differently! We both agreed, especially since we hadn’t had any time off work since the wedding, that it was important to make time for the two of us, so we began on Christmas Eve starting a tradition I hope will continue. It was an idea of Sweet’s, which I thought was

absolutely fantastic: cooking as many Christmas dinners as we could together, packaging them all up with cutlery, insulating the lot and driving around some of the “bad areas” of the city looking for people on the streets going hungry. We drove through downtown, the words of Fairytale of New York filling the car, a stack of dinners piled on my knees. It was -26°C that night, the wind bitter and the streets slick with ice. We ended up at what’s commonly known as one of the scarier street corners in the city, and ended up giving away everything we had. I know it’s a dangerous thing to do, but we took precautions. We stayed together. And the chance to make someone’s Christmas Eve a little more bearable was worth it. I held on to his arm tightly as we approached people queuing outside shelters, people under the influence, people huddled in doorways… it was a heartbreaking, terrifying, eye-opening experience, and I think it’s important to acknowledge that we are all so incredibly lucky just to have a roof over our heads over the holiday season, and even more lucky to be able to have someone to give a gift or a card to. We can get so wrapped up (pardon the pun) in ideas of presents, of family dinners, of decorations and of BBC Christmas specials that it can often go unnoticed that there are people living in the very same city for whom Christmas is just another day without food, warmth, friends or family – and I’m really proud of Sweet for wanting to spend Christmas Eve doing something small to acknowledge that. I hope this is a tradition we can continue over the years. 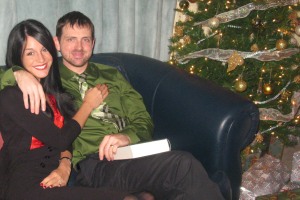 Christmas itself was just about perfect. We slept in a little, exchanged gifts (any girl whose husband buys her a levitating TARDIS is a lucky lady indeed!), ate a wonderful lunch with my Dad and stepmum, Skyped with my Nan (and watched her open pictures and videos from the wedding – magical), watched Dumbledore in Doctor Who, visited my new in-laws (who were incredibly kind and generous!), and spent the evening together, as husband and wife, just curled up with a warm drink, a cuddly cat, ’80s sci-fi Schwarzenegger movies and The Nightmare Before Christmas. It was fantastic.

This was also the first year in many that I’d had to work between Christmas and the new year. Which was pretty rubbish. The rest of my department were all on holiday, leaving me responsible for all 30 participants in our program, which on a regular day would be out in the field, either job searching or providing housekeeping/snow shovelling services to seniors. However, it was decided that instead, during the days I’d be the sole member of staff, I would keep all of them in and teach them computer skills and resume/interview techniques. Now, I recognised what was happening immediately as a case of “be careful what you wish for” – number fifteen on my list for this year was to “teach a full class of people without shaking with nervousness and actually be excited about doing it.” I was being handed the opportunity to do exactly that. I spent the two

days prior carefully collecting information, building activities and curriculum, and arrived the morning of to a full class. I was in a noisy computer lab, so I, soft-spoken by nature, had to learn to project. I’d grabbed the wrong PowerPoint file, so I also had to learn how to wing it. I had to answer difficult questions, so I had to learn how to think on my feet. But you know what? I got exactly what I wished for. I can now say I had the experience of a real teacher – and I came out the other side. I stepped out of the building after two days of instruction and literally SKIPPED, clapping as I got into the car. I took people from not knowing what a mouse was to being able to type, e-mail, attach resumes, answer real-world questions, and hopefully, be that much better equipped for success. I definitely don’t want to be  in front of people full-time. But I’m happy I tried. 🙂

One of my closest and best friends in the whole world was in town for the holidays, and I was so beyond thrilled to see him after being able to communicate only by text and Skype for months that I made sure I was at the airport the second he arrived in Winnipeg! We spent numerous nights over the last couple of weeks catching up, each time cramming everything we’d missed over the last few months into four or five hour conversations. I even got to play matchmaker for the first time, which didn’t work out too badly at all! 🙂 I hate that some of the people who mean the most to me have to live so far away, but I’ve come to learn that distance doesn’t have to mean the end of a friendship – it can be the fuel to keep it growing even stronger. I’ve also learned that absence truly does make the heart grow fonder, and to cherish the time you can actually spend together in person. 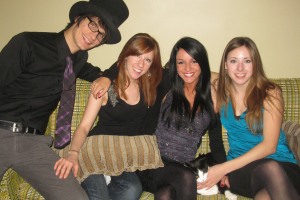 It’s 2011! New Year’s Eve was spent celebrating birthdays, watching Harry Potter, eating gourmet burgers, and ringing in the new year dancing with a wonderful group of friends in a living room to Stevie Wonder’s Superstition. It was brilliant. I didn’t make resolutions, since I’ve still got a few things left on the 26 Before 26 – hopefully in 5 months time, I’ll be able to say I stuck to them all – or at least attempted them. 🙂

Happy New Year everybody! I can’t wait to catch up with you all soon, and I sincerely hope this year is your best one yet. 🙂