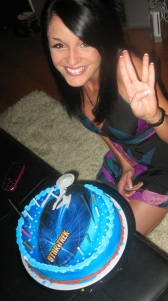 der of business here is a MASSIVE THANK YOU for all the birthday wishes this weekend! You guys absolutely made my week and I love you all!! Also? BEST. BIRTHDAY CAKE. EVER.

So, moving on, one of my tasks on the 26 Before 26 was to meet new people, branch out and make new friends. Pardon me while I get a little deep for a minute, but I’ve had the experience once before where I’ve put something out into the universe, and the universe has abruptly halted whatever it was in the middle of only to deliver in abundance. In situations where I’ve suddenly decided I didn’t like something about the way I was living, and actually declared I was going to bloody well do something about it, things seemed to… kind of just fall into place? I don’t know what to chalk it up to, but the universe is proving to be a supremely awesome listener/provider.  One of the things I’ve been uncomfortable with in my life lately is the lack of really close friendships.  There are people I absolutely adore… but have moved away for education, still live back in England, or I just don’t see as often as I’d like to here in the city. And I want to change that this year. I want BFFs, dammit!

So, in the last week or so, things have started changing. New people have started cropping up at every turn, and with them (hopefully!) the opportunity to build the foundations of new friendships.  It started just over a week ago when someone who’d originally been a Facebook suggestion (You have 8 friends in common!  Surely you know each other!) turned into a weekly penpal with whom I started exchanging emails for the past couple of months. We shared all sorts of interests, and he recommended the book I’m currently reading (and ADORING) on life, purpose and seeing the world differently. (Review to come!) Long story short, we met in person last weekend – and proceeded to chat for over three hours about where we grew up, football, science, philosophy, music and personal goals… TOTALLY nerded out, and it wasn’t awkward in the slightest! I really hope this turns into a more regular thing – and I’m still surprised this person still actually showed up after a random ‘hello Internet stranger, you seem awesome, be my friend? kthxbai’ – but as a mid-twenty something in a world where friendship circles already seem to have formed long ago, making new ones calls for something outside the box. Even if that’s at the risk of coming across a total weirdo. I’m very grateful the risk was worth taking and I’m hoping this is the beginning of a great friendship. 🙂 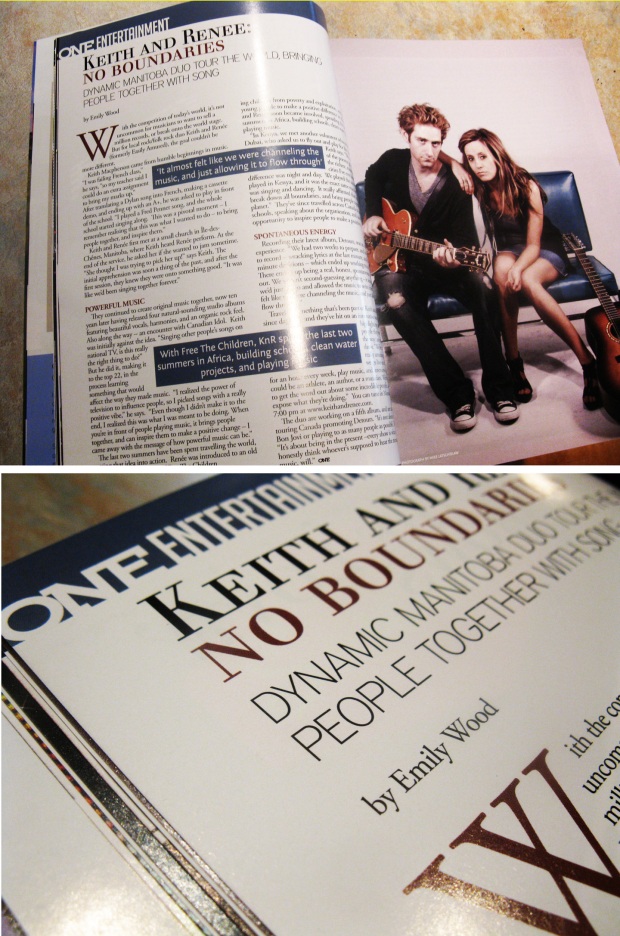 Coincidentally, said recommended book had a part to play in last Tuesday’s event: going out for dinner with one half of the duo that’s going to perform at our wedding in December. I interviewed one half of Keith and Renee a few weeks ago for the magazine that was kind enough to publish me, and Keith used to pop into the post office where I worked back in 200….3? On top of touring the world, travelling to Africa to build schools and water supplies and going across the country promoting positive messages and new albums, he plays in the same church band Sweet does on Sunday nights. Oh, and coincidentally does hot yoga every day, and is totally up for a buddy. Turns out the author of that book I’ve been reading is one of his favourites, too, so we chatted about literature, personal growth and making a difference in the world over dinner. One of the most POSITIVE people I’ve ever met in my life – it was great just to get to know someone so upbeat that little bit better, and with both of these people, it felt more like I was catching up with an old friend I’d had for years than someone I didn’t really know much at all. After dinner he drove me to the bookstore and bought me a book I “had” to have. When I asked why, he said “because you basically quoted the title of the book while we were talking,” and he felt like I was “meant” to have it. What was it called? Change Your Thoughts, Change Your Life.  If you’ve been reading for a while you’ll know how incredibly meaningful and apt that is. I was left with a really good feeling of just finally having the right people on my path, who left me feeling like I could totally be myself, and that was absolutely okay, and full of encouragement, inspiration, and real self belief. I can’t even describe the sense of excitement I felt after two such awesome connections within such a short time frame.

Then came Thursday. The Meetup. I went to the pub to meet a group of “strangers” – the Winnipeg Creative Society ‘Secret Handshake’, who get together once a month for networking and chatting and sharing projects. Sounded totally my cup of tea, so I’d added a few people on Twitter before I went, and since it was around my birthday, what I thought was a  joke about cake and party hats TOTALLY became a reality when I got there.  I ended up quickly surrounded by about 40 people wearing elasticated pink cones on their heads, with a giant carrot cake, candles, all singing me happy birthday!! I “knew” maybe two people, who I’d only been tweeting with for a couple of weeks, and proceeded to chat with a whole bunch of other people about work, about creativity, technology, writing, art and sci-fi.  There were too many people to meet individually, but the ones I did get to connect with were awesome, and as a result I am apparently now starring in one advertisement, one music video, having ice cream with a new neighbour and going to a dance party at a composer’s house, as well as preparing for an ’80s karaoke night in drag. After the cake actually showed up, I’m taking everything entirely at face value. This is going to be fun 🙂  Someone caught some video clips on the night (and edited this on their iphone!!) (including the cake!)

I spent so many years consumed with the worry that I wasn’t popular enough, fun enough, or into the same things as most people, worrying about something being wrong with me because I didn’t have those Sex and the City friendships by which I seem surrounded. Only recently, I’ve been learning, writing, and thinking more about the importance of staying true to who you are and letting go of the cares and worries of how big (or small) a social circle is. I think it was shortly after my impromptu blogging rant that I really began to believe and carry out the notion that you shouldn’t have to pretend to be someone you’re not in order to fit in. If you have to carry around a persona that masks your true self, how will you ever have true friends? I spent far too much time prioritising popularity over integrity, and it almost shames me to say it. I guess it’s all part of growing up and finding out who you are. But these days, I’m learning that when you cease to empower societal expectations, almost dictations that you need to look or act a certain way in order to succeed in life, life just starts to become genuine, natural, and incredibly fulfilling. When you choose to let go of what doesn’t matter… the people that do will naturally start to flow in.

I feel blessed right now for the changes happening in my life, and excited about what’s to come in the near future. I sign off today with a song that I feel is quite fitting these days – reflecting a journey from fear to awareness, from old chapters to new journeys, from uncertainty to determination, and of the excitement I feel this very moment.

…Stars, hide your fires, for these here are my desires,
And I won’t give them up to you this time around
And so I will be found with my stake stuck in this ground
Marking the territory of this newly impassioned soul…