Last week, we’d been blessed with sunny skies and temperatures hovering just slightly below zero (officially coat-free weather!), and I know that spring is in the air.  Unfortunately spring here in Winnipeg means vast amounts of water and brown slush everywhere for several weeks, but with the imminence of warmer horizons I can’t help but feel excited as we move into another season.  As we move forward I have to remind myself to reflect back – those New Year’s Resolutions aren’t going to be maintained if they’re not addressed every once in a while, so today: a quick check in, to make sure my arse remains firmly in gear. 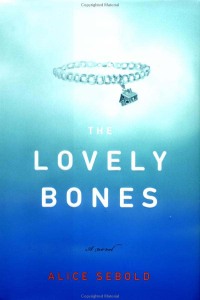 My first was to read a book a month. I know this is a laughably puny goal compared to some of you literary connoisseurs but my heart has always belonged to the written word, and it’s a goal I was determined to keep (if not exceed). I’m happy to say I’m still on track, and last month picked up The Lovely Bones – I refuse to see a movie without first reading its inspiration, and so far, it’s absolutely gripping.

Second – the whole driving thing.  The resulting treachery from daytime melting and nighttime freezing has left even walking a feat not to be undertaken without protection, so it’s still on the backburner for now – but this time in a month or two, I may very well be reporting to you from the driver’s seat.  Or (likelier) from behind my Driver’s Handbook.

Third: Becoming pain-free.  I started seeing a massage therapist earlier in February who had a background in osteopathy (gold!), and have been seeing him weekly since.  Yes, each session involves lots of pain, yelling and tears, but is balanced out nicely with information that actually makes sense – and a weekly dose of nerdiness as we chat about Star Trek and Scandinavian power metal. Definite bonus.  Apparently I have a case of “sacral and pelvic torsion” at the base of my spine, trapping all the nerves on one side and making the entire other side of my back hurt ALL THE TIME. The way he explained it made sense, for once – so I’m going to plough through another few sessions and see how it feels at the end of March.  Fingers crossed (I only have coverage to carry me through until then, anyway!).

Number four: Losing the anxiety.  I taught my biggest group yet in February, and through initially terrified by an almost-full house, relaxed halfway through and found the key to comfort and confidence is to make things funny.  People who don’t really want to be there will relate more easily if you make them laugh, and once you’ve caught them, they’re more likely to retain/be interested in the information.  I’m going to revise my PowerPoints over the next few weeks, learn to relax a bit more, and make people laugh.

I’ve probably said this to you already in an email, but everyone who commented on my “Real Self Portrait” post– you have no idea how much you’ve helped me in addressing that part of my nervousness.  Thank you so much for sharing and for reaching out – I’ve learned recently that other people don’t see or pay attention to the flaws I see in myself.  I’m just retraining my mind to not be so quick to criticise myself and actually give credit to some of the positive things other people say about me.  You’ve helped me so much in my ongoing journey and for that I am truly thankful from the bottom of my heart.

Five! Cooking! Did any of you try the awesome salmon recipe from a few weeks ago?  Recently we’ve made a few more dishes, no exploding noodles this time but a great (simple) lemon pepper shrimp pasta.  We’re going to move on to more adventurous things in the next couple of weeks, I swear, but I’m still learning lots along the way.

And lastly – singing in front of people.  LiLu posted a great guide on how to pwn at karaoke recently, and Sweet and I have been powering through Rock Band on Friday nights and I’m getting more and more comfortable. Maybe I’ll have the guts to vlog it sometime. Or try real karaoke.  But the most important thing is it’s not intimidating me half as much as it used to – I’m almost excited to get back on stage!

So how am I doing? I think this is the first time I’ve really held myself accountable to keeping my annual goals, and it’s a fun process. I’m learning, I’m happier, and I’m growing.  And big thanks to you guys for helping keep me motivated. How are you doing with your resolutions?

And PS: Totally recorded my vlog and answered all your questions last night.  GOODNESS am I awkward on camera!! Will post on Friday… 🙂