Last night I crossed off a big something on my Life List.  Not only did I meet one of the superstars of the literary world – I met my hero.

I first found out Neil Gaiman was coming to Winnipeg about a month ago.  On Halloween, numerous independent bookshops all over North America entered a contest.  The entry: host a graveyard-themed party in celebration of Neil’s latest release, The Graveyard Book.  The prize: a visit, reading and book signing from the man himself.  My best friend and I braved the cold and headed down to our local branch of McNally Robinson to find a wondrous emporium of the macabre, decked out in a breathtaking array of ghoulish displays; costumed staff, a Wheel of Misfortune, tombstones of the “late” Dave McKean and even personalised death certificates, authorized by Misters Croup and Vandemar of the Kingdom of Stormhold.  It was incredible, and it’s safe to say I was pretty much in heaven. 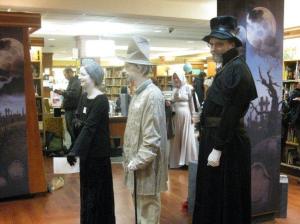 Yesterday morning, I received an email from the shop explaining how the day was going to go.  They’d received such huge feedback and HUNDREDS of confirmations, so they were going to have to issue admission tickets prior to going in.  Luckily it was our work Christmas party (a lovely, fancy lunch) and we were dismissed at 3:00, so I headed straight down to see if there were any left.  Already piles of people were accumulating, but luckily I snatched two tickets before they closed for half an hour to set up for his arrival.  It was the craziest thirty minutes of my life.  Literally hundreds of people piled into centre court, while security guards tried to herd us into some sort of order, endeavouring in vain to maintain some semblance of stability in the middle of a busy mall.  Right before Christmas.  Somehow, I ended up near the front of the queue, and as mentioned in today’s Free Press, nigh on six hundred people piled behind me, ready to cram in to a little shop with dreams of meeting a legend.  Sweet arrived from work, out of breath from dashing madly through the shops, with seconds to spare before the doors were reopened.  We piled in like a raging monsoon, pouring rapidly down the stairs and flooding the floor, drowning the shop in a sea of impassioned anticipation.

We stood, packed in like sardines for almost an hour; any sense of claustrophobia was stifled by the imminent dream.  A few minutes after six, he arrived, as dishevelled, becloaked and eloquently spoken as I’d ever imagined.  An (unnecessary) introduction by the staff passed, and he began to speak.  I’d always imagined how he’d sound; the voice behind the tales of immeasurable imagination by which I’d been swept away.  He sounded just like Alan Rickman, which only fuelled my adoration.  He stood in the centre of the throng of literary fanatics, charismatic, charming and effortlessly brilliant.  He answered questions, read us a passage, and told us he was happy to stay ‘til 1:00 in the morning if he had to, to make sure everybody’s books got signed.

Unfortunately, our section had received the number which would be last up, and all children were going to be seen first; it was already nearly eight and I had a mass of Christmas baking to do before morning – so I grabbed a couple of pre-signed books, took countless photos and a few videos of the master in action, and headed home, thoroughly exhilarated.  (I later heard from a rather annoyingly less busy friend, who gave up at about 10:00, when they were only on number three!)

It’s okay if it doesn’t say “To Emily” inside – I now have a copy of my favourite book signed by the legend himself.  I got to be a part of a huge following of people who’ve been moved by his sheer brilliance of imagination as much as I have.  I have him on film, so he can read me a bedtime story whenever I like, and I have photos from mere feet away.  This was one of those moments I’ll remember for the rest of my life, and I wouldn’t have missed it for the world.